Swiftpcoptimizer – Get Ultimate Protection for Your PC against Junk Files

‘CONES AND CURRIES’ – A REVOLUTION IN ‘ONE HAND EATING’!! NEW DELHI BASED VARN HOSPITALITY HAS CHANGED THE PEOPLE

Agra is one of the most populated cities of Uttar Pradesh, India. One of the biggest tourist places of word, ‘Taj Mahal’. Agra does not feature in the list of top 10 cities in India when it comes to technology, It or tech talent. Yet, more than a million people in India and almost thrice the size of it globally, keep themselves updated with technology, owing to something created here. – Amit Agarwal

Labnol.org is a technology blog started in 2004 by Amit Agrawal . Amit Agrawal is a common name in India, Lablob is not. But in the last 11 years this equation has changed considerably. Amit Agrawal is a India’s first professional blogger. A techie at heart and a writer by virtue of his profession, Amit has alot more to offer. In this week’s Techie Tuesday, Amit speaks with AllStory, sharing his journey so far, his success story and the decisions which have brought him where he is today.

An engineer in a business family -Amit Agarwal

Amit Agrawal belongs to a business family; Amit had a tendency towards joining the family business after growing up. Through he was a topper in his class. He was never interested computer and engineering. Mathematics was Amit’s favourite subject and that helped him decide to choose engineering after his school. He was also looking for flexibility to do a lot of things and medicine was ruled out. Like a typical joint family, the woman in his family wanted him to stay back in Agra while the men encouraged him to do whatever interested him the most. He decided to choose engineering because it would give him more flexibility in the future unlike medicine. Even IIT- Roorkee(then REC) he opted for Computer science engineering because that’s what students with good ranks were opting for.

Academically, things didn’t change much for Amit at college, where he was among the toppers in his batch at the end of the first year. He recalls.

“When I got a computer, my interest was not towards coding but on the software installation side. I would be really curious to know what happens internally, what files are escalated or modified due to installation of a software in the system. Today also, I am pretty much doing the same thing.”

Amit fondly remembers his final year of collage when he worked on a project at Maruti (Gurgaon factory) on inventory management.

“At that time, NetScape navigator was the only browser and desktops were running on UNIX operating system. We had shared emails (three people, one email account) and with only two computers in the library, one had to wait to get a chance to work on the system or check emails”.

Amit graduated in 1990 with an above average academic performance and joined ADP Inc in Hyderabad where he worked on database for five years. He was working for clients like Goldman Sachs and MeryII Lynch on capturing transaction, reporting capability running on UNIX, Pearl and PHP. It was a 70-80 member team and his focus shifting on management rather than coding. Amit says,

“One of the best comes of my job at ADP was that I made good friends. At my work, I was putting a lot of efforts, including night-out coding sessions. It was a huge learning experience for me.”

At ADP, Amit learnt a lot about to deal with clients, teammates and people in general. He admits.

“I couldn’t have learnt this in the family business. What I’m doing today is all based on what I learnt during that time. In collage, the focus was on theory, but with actual live projects, the much-needed practical knowhow came.”

Amit always wanted to stay back with his family, but also kept his options open. After spending five years at ADP, He was all set to go back to his roots, Agra He also got married around that time. Amit recalls,

“When I moved back, the only option I had was to start working as a freelancer. Blogging was extremely new in 2004 and it was a very different environment without social media and other online networking/ social tools.”

In 2004, Amit became India’s first professional blogger and founded LABNOL. There’s no particular reason for choosing the name Labnol besides that it was unique (unlike his name). One of the most read blog aggregation (Indian filter blog) in 2005, Desipundit picked a lot of content written by Amit and he got of content written by amit and he got the much needed reach. He participated in blog campus across various cities and got noticed because of the uniqueness of being the only one blogging as a profession.

Labnol’s over the years -Amit Agarwal

Labnol’s focus consumer software has not changed over the last 11 years. He takes us thought the evolution at Labnol.

“The style of writing has improved a lot. Earlier, It was text- heavy whereas now we have move visuals, (audio, video and animation). Long form writing is also common on Labnol now. I’ve been very clear about writing about software/products based on my own experiences rather than going by news/sources”. Through Google Photos was announced earlier, only after spending a month’s time using it, I was convinced to write an in depth review about it.

According to similarweb, LABNOL gets almost three million visits in a month. Amit says,

LABNOL started making money after a year. Today, there are multiple sources of revenue for amit which includes Google adsense, contextual ad networks, and direct ads through Blogads & IDG Technetworks. 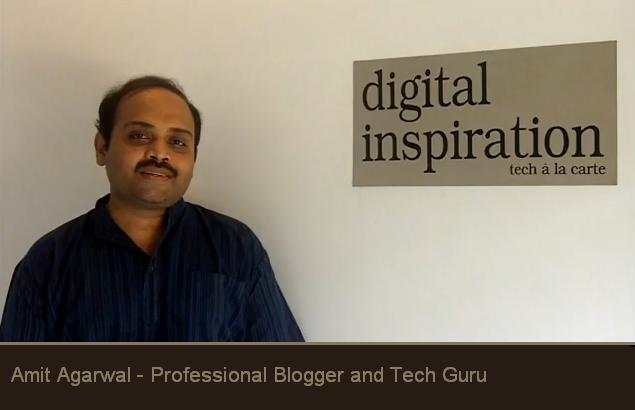 A Techie at heart and millions in pocket

Considers himself a technologist at heart who wants to create stuff. In his own words,

“Technology is my life, I am always thinking about it, even when I AM TAKING A SHOWER. It helps us in becoming more productive and knowledgeable.”

Amit had always enjoyed building a tool/software to solve a problem. For him, It is an added advantage to have a blog and the massive reach. He has worked on several projects in the last two years when his focus has shifted from writing to building as well. These include single page apps, tools enabling MP3, transcription on web browser, podcast gallery –podcast on Google drive, and any others. He has written multiple scripts/apps around Google doc/drive. Amit sources ideas from Reddit(ZeroDollarMovies porject), friends, users and forums.
He recalls,

“One of my friends was facing issues with tatkal booking because of the short window for booking tickets. I thought of making the required field’s auto fill to solve his problem. When I released it for the public, travel agents across the country purchased it and it’s used extensively now.

He follows a free premium model of monetization for these, where some of the features will be free and more can be availed at a premium. Labnol’s revenue is in the range of a few cores per year at the moment.

Learning of a decade -Amit Agarwal

Amit things that one of his biggest shortcomings was the inability to build a team which could have helped him in the expansion (and coverage) in other areas. He shares the following advice for the techies and online communities:

1.A sound code is less about writing the code and more about the thought process which goes behind making it scalable.

2.Keep things as simple as possible. I prefer products which can do only one thing but do it very well. For example, Dropbox.

3.For consumer product companies and brands, it helps if they are more communicative. A lot of perception is built and ruined based on how they handle consumer problems and queries.

4.Suddenly, there’s an urge to go mobile-only ditching the desktop. I am not sure if it’s a right approach.

1.Only focus on creating stuff you love and which you would use yourself and suggested to relative/ friends.

2.Build a solution to solve real world problems. There is no depth of them.

3.If you are planning to do blogging full time, please rethink. A lot of factors which are not in your control will come into play.

4.Know your limitations. Indianbloggers.org maintains a list of active bloggers in India. It keeps an account of the blogs which have phased out over time. Sometimes, the blogger loses interest, at other things he/she gets lucrative job offers, or eventually gives up blogging for some reason.

5.Money should be the secondary part. Passion is priority, business is second. It has helped amit write what he liked and brought him this for.

6.Be honest with the audience and do not pretend to know things you don’t know.