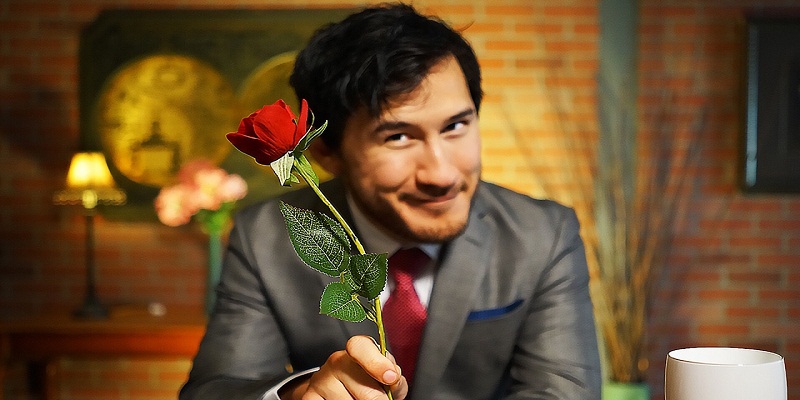 Popularly known as Markiplier (stage name), Mark Edward Fischbach is an American YouTube sensation from Honolulu, Hawaii. He started his career in Cincinnati, Ohio and he is currently living in Los Angeles, California.

As of November 2017, his YouTube channel has grossed up to 8 billion views as well as 18 subscribers. Currently, he is ranked 26th among the most subscribed YouTube channels. He specializes in survival horror games played at Let’s Play videos.

He was born on June 28, 1989 in Honolulu, Hawaii. His father was a military personnel and his mother is of Korean descent. He moved to Cincinnati, Ohio after his birth with family. Originally, his plan was to become a biometric engineer so he studied in it at the University of Cincinnati. He was dropped out of his college because he wanted to focus on his YouTube career. Jason Thomas Fischbach, his elder brother, is an author of Twokinds, a webcomic, and an artist as well.

Markiplier has been famous for his sensational commentary in video games, such as screaming, yelling, crying, and cursing in his Let’s Play videos. In his videos, he never controls profanity, though he subtitles his curses often as ‘luck’ or ‘duck’ for ‘fuck’. He is also going to brand his channel using a pink mustache and dyed his hair blue, pink, and red.

He sometimes makes vlogs to have one-on-one conversations with the community on different topics; some of them are inspirational, but usually about his channel and himself. He also attends conventions, such as VidCon, PAX, and Comic-Con, to engage in meet and greets, signings, and panels. To meet fans, he also joined Make-A-Wish Foundation.

Format of the Channel

Basically, Fischbach is famoius for his walk-through videos of horror and indie games, such as Amnesia: The Dark Descent as well as its sequel, a series of Five Nights at Freddy’s, Garry’s Mod, Surgeon Simulator 2013, Happy Wheels, Slender: The Eight Pages, Minecraft, and others.

He has also teamed with various celebs like Jimmy Kimmel and Jack Black. He also appeared in Smosh: The Movie, asdfmovie series of TomSka, Gamer’s Guide to Pretty Much Everything by Disney XD, Five Nights at Freddy’s: The Musical, and YouTube Rewinds 2015 and 2016.

A current staple from his channel includes charity live streams. In these streams, he plays different games and campaigns for and collects donations for different charities, such as Depression & Bipolar Support Alliance, Cincinnati Children’s Hospital Medical Center, and Best Friends Animal Society. Along with his viewers, he has raised up to $1,118,645.14 in July 2016.

From Beginning to Today

March 6, 2012 was the first day for Fischbach to enter YouTube. He created “Markiplier” channel and uploaded his very first video on April 4, 2012. His first series was a walkthrough of “Amnesia: The Dark Descent”. After playing various game series, such as Dead Space and Penumbra, his AdSense account was banned by YouTube. His appeal to YouTube was apparently lost. Hence, he created a fresh channel on May 26, 2012, named “MarkiplierGAME”.

In 2014, the channel was listed among Top 100 Channels by NewMediaRockstars and ranked 61. Fischbach also announced that he was moving to Los Angeles to get closer to other resources for his YouTube channel, including content creators like YouTube Space. His fellow YouTuber Jenna Mae and Fischbach made appearance on Jimmy Kimmel Live! On September 2014 after the backlash which is received by Kimmel about jokes he made about Let’s Play videos and YouTube. He was rated 6th in 2015 among the 20 most influential celebs among the teens in the US.

Fischbach announced in a video in late 2015 that he has committed to give up alcohol due to the lack of an enzyme required to break alcohol down. He suffered a transient ischemic attack and hospitalized and doctors advised him to refrain from alcohol. So, he decided to do so. He signed to a subnetwork, Revelmode in January 2016 to Maker Studio apart from other YouTubers like PewDiePie and Jacksepticeye.